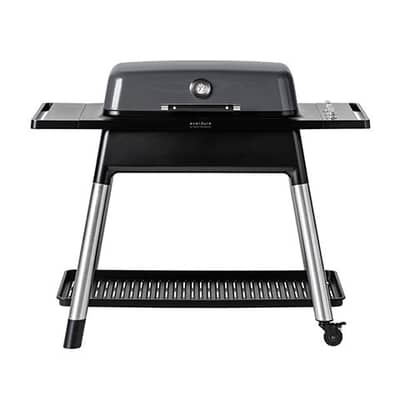 Heston Blumenthal more than understands what it takes to create the perfect barbecue experience with his 20 year professional boundary pushing culinary background, along with his extensive status quo challenging cooking knowledge, making him totally aware that for many people a gas barbecues is the go-to for outdoor cooking for it's control, more rapid progress up to grilling temperature and overall grilling simplicity.

If the simplicity that a gas BBQ gives is a major factor then the everdure by heston blumenthal FURNACE Graphite Gas BBQ, with it's ideal mix of technology and aesthetics, will give complete control. With it's design cues taken from minimalist Danish design then adding three stainless steel high performance burners for super-fast heat up with instant searing, ergonomic taps with rotary ignition, a high hood that is ideal for convection cooking and a large cooking surface ensuring that food will be evenly cooked and delicious whether firing up the grill for simple steaks or attempting something more ambitious.

The everdure by heston blumenthal FURNACE Graphite gas BBQ not only has had thought put into the design of it's grilling features, such as the three matt vitreous cast iron grill plates with integrated flame tamers, but to be both fuss free and mess free as well being easy to use with a seamless easy to clean design that has the power and flexibilty or almost any grilling situation.

The everdure by heston blumenthal range of barbecues, gas or charcoal, have been developed, and thought about, from the ground up to create an evolution in the full barbecuing experience combining the Aussie grilling know how of Everdure's designers and engineers with Heston Blumenthal's hands on involvement.

Heston has helped design the everdure by heston blumenthal FURNACE Graphite gas BBQ with it's innovative features and thoughtful attention to detail all wrapped up in a beautiful, minimalist Danish design influenced contemporary look to create a versatile and powerful gas barbecue that is both simple to use and easy to love with it goods looks making it at home on any terrace, patio or in a garden.