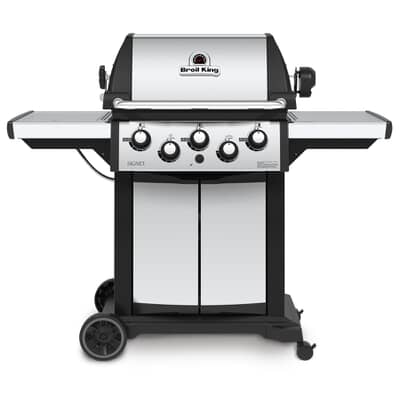 THIS ITEM IS EXCLUDED FROM THE EXTRA 10% OFF 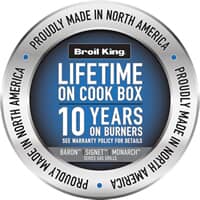 The Signet Series of 3 burner gas barbecues have always been one of the most popular barbecue ranges in the Broil King range, as the grills have plenty of cooking space, plenty of grilling power are simple to use and easy to live with, but they have been made even better with an update for 2016 which adds of stainless steel drop down side shelves instead of the thermoplastic used previously.

The Broil King Signet 390, with it's side burner, detachable rear rotisserie burner, and rotisserie kit, has been engineered and constructed to give both outstanding quality and cooking performance with the three stainless steel Dual-tube main burners giving the options to cook and heat a variety of foods at the same time.

With heavy duty cast iron cooking grids fitted as standard for their superb heat retention capacity enabling foods to be seared more successfully than on other grill types. The cooking grids can be simply reversed with searing points on one side, and grooved channels to self baste food on the reverse side whilst the large deep oven is perfect for convection cooking large roasts and turkeys.

As dependable as all other Broil King barbecues the Signet series is trusted by barbecue enthusiasts around the world and ensuring you always get the perfectly grilled salmon, mouth watering corn on the cob or garlic bread, and best of all, everything will cook evenly whenever you grill

Cart has been designed to accommodate a 13kg Patio Gas bottle