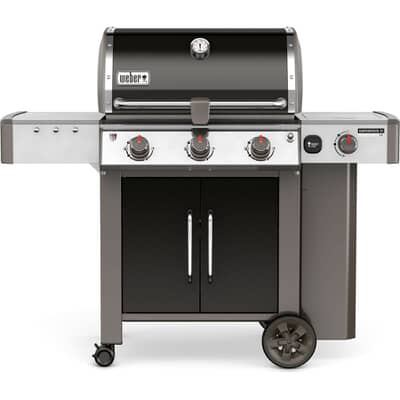 The WeberÆ GenesisÆ II LX E-340ô GBSô Black Gas BBQ features the GS4ô High Performance grilling system, an innovative grilling system that WeberÆ has used over 30 years of gas barbecuing experience, culinary expertise and, most importantly, feedback from their customer's to engineer. The GS4ô High Performance grilling system means that power and convenience will never again be dependent on the amount of space you have or number of people to feed as WeberÆ have created their most powerful grill engine so far.

Almost every single component of the GS4ô High Performance grilling system, the ignition system, the burners, the Flavorizerô Bars and the grease management system has been upgraded and, in most features, totally re-designed to boost performance and for ease of use.

Much effort and many years of development combined with constant re-enginering has gone into sourcing exactly the right ignition system for the re-thought GenesisÆ II series to create a system built to ignite every time with each burner having a newly developed igniter. WeberÆ are so confident in the improved ignition that it now has a limited 10 year warranty. All the LX models in the GenesisÆ II range have a specially developed enhanced version of the electronic ignition system with a switch built in to each burner ensuring smooth ignition every time just with the turn of a control knob.

The burners on the WeberÆ GenesisÆ II LX E-340ô GBSô Black Gas BBQ now have a unique tapered shape to combat gas purging giving a consistent gas flow from front to back ensuring an even heat distribution over whole cooking surface so food will grill evenly and consistently where ever it is on cooking surface.

All the models in the GenesisÆ II LX range have an additional enhanced High+ function to give a sear burner on top of each individual burner so meat can be seared when you want and where you want giving extra power and control over the whole cooking grate. Each burner can be turned up to their highest setting to give an added boost of heat anywhere on the cooking grate. This feature makes any GenesisÆ II LX model perfect for searing food, creating those much sought after sear marks, or for decreasing the time needed to pre-heat the cooking grates to get them to grilling temperature.

Upgrades to the Grease Management System simplify the general maintenance that is needed to keep any gas barbecue clean and grilling at it's best. The Grease Management System helps with the removal of excess cooking juices whilst reducing the risk of flare ups. Cooking juices not fully vapourised by the Flavorizerô bars are channelled away from the burners into an easily accessible catch pan located under the cookbox to make it even simpler to empty the catch pan after each grilling session.

Underneath the cooking grates and above the re-designed burners sit the classic WeberÆ Flavorizerô bars which are carefully shaped at just the right angle to catch the dripping fats and cooking juices that will smoke and sizzle to add the characteristic barbecue flavour to the food being grilled. Any cooking juices not vapourised by the Flavorizerô bars will then follow the slope of their unique angle to be funnelled away from the burners down into the Grease Management System.

The WeberÆ GenesisÆ II LX E-340ô GBSô Black Gas BBQ has a Side Burner set into one of it's two side tables, the one which does not fold away, which allows foods that are not suitable for the main cooking grates to be cooked on the barbecue making boiling pasta, additional side dishes or heating through sauces an option

A 13 kg Patio gas bottle, which will need to be purchased locally to power the WeberÆ GenesisÆ II LX E-340ô GBSô Black Gas BBQ , can be located on a bracket behind the designated storage screen at the side of the grill making it easier to access to get in and out to replace plus also creating a more generous space behind the solid double doors underneath the grill for all those barbecuing essentials.

TheWeberÆ GenesisÆ II LX E-340ô GBSô Black Gas BBQ also features a fully re-designed more ergonomic double hinged lid that has been re-engineered so that it is now more convenient and easier to open and shut. On the handle there is a handle light mounted so the total cooking surface can be fully seen in the dark plus with the push of a button the control knobs light up to give total control no matter what natural light is available so useability or convenience does not have to be sacrificd whatever the time of day.

More innovation can be found under the re-designed lid as the warming rack has been specially designed to accommodate the WeberÆ ElevationsÆ range of accessories. The warming rack creates a tiered base for each of the WeberÆ ElevationsÆ accessories to be located into when it is folded down to increase the grilling capacity plus make it more efficient as everything is located above the cooking grate

At the heart of the cook box of the WeberÆ GenesisÆ II LX E-340ô GBSô Black Gas BBQ sits a porcelain-enamelled cast iron Gourmet BBQ Systemô Cooking Grate which can be used as a regular cooking grate or by simply lifting out the 30cm middle section and replacing it with one of the separately purchasable interchangeable Gourmet BBQ Systemô accessories ñ Dutch Oven Insert, Waffle and Sandwich Iron, Griddle Insert, Ebelskiver Insert, Pizza Stone with Carry Rack, Wok and Steamer Insert and Poultry Roaster Insert ñ which can greatly expand the versatility of the grilling, roasting or baking options available on any WeberÆ Gourmet BBQ Systemô equipped barbecue.

The WeberÆ GenesisÆ II LX E-340ô GBSô Black Gas BBQ also features an integrated frame in it's side table so is fully prepared to accommodate, and be fully compatible with, one of the newly developed iGrillô3 thermometers. An iGrillô3 thermometer measures the temperature simultaneously in different food items using up to 4 probes with a Bluetooth facility allowing the iGrillô3 to combine with a smart phone to offer a whole range of grilling possibilities.

So the WeberÆ GenesisÆ II LX E-340ô GBSô Black Gas BBQ will happily fulfill the dream of a fully featured kitchen in the comfort of your outdoor living space so while the GS4ô Grilling System creates it's magic under the lid you can create sauces on the side burner as everyone eagerly awaits their food.