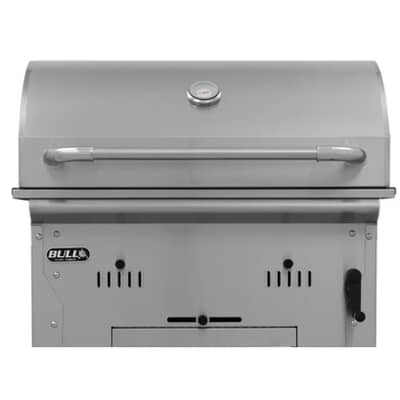 The Bull Bison Built In Charcoal BBQ features a venting system and gasket designed to allow greater temperature control with an enhanced ability to regulate the oxygen flow into the firebox. The Bull Bison Built In Charcoal BBQ can be set up efficiently and productively both set up for low and slow BBQ or to crank the heat up to get a steak house quality sear on steaks and chops.

The Bull Bison Built In Charcoal BBQ is a 76 cm Stainless Steel Charcoal Grill which will be particularly sought after as Charcoal fuelled Built In barbecues are an extremely rare item in the UK.

Bull Outdoor Products Inc. have reached widespread prominence in the North American grilling industry with over 900 dealers and distributors throughout the United States, and Canada since they started out over 20 years ago.

One of the many reasons that they have become a major player in the North American barbecue market is the build quality and attention to detail which their extensive customer feedback and research has led them to apply right across their whole range of Built In or Cart based barbecue grills to bring to the consumer products that are 'second to none!'.

Bull Outdoor Products Inc. comprehensive range of solid, well built Propane and Natural Gas powered Built-In and Cart Based and Charcoal fuelled barbecues are now available to purchase in Europe with full CE Approval offering the same performance, build quality and attention detail that has made them such a major brand in North America with no compromises something which Bull BBQ are prepared to back up with their Lifetime Warranty on all their barbecue grills.