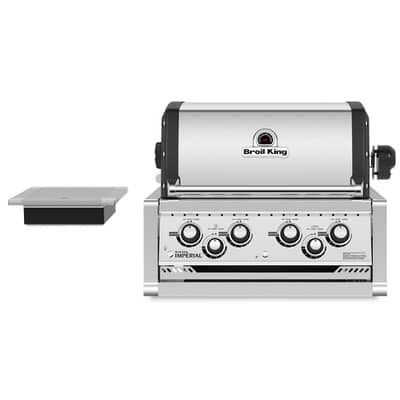 Taking their inspiration from professional cooking appliances, being constructed in Canada from North American made steel, the Broil King Imperial 490 - Built In has been created so that it can be built in to all but the smallest outdoor kitchen design to meet individual needs requirements and the space available. This can be made simpler and easier with the use of separately purchasable Broil King Pod Cabinet or Broil King Pod Cabinet with Door modular units.

Available in both LP, to be run from bottled Propane gas, and NG, to be connected into the mains gas supply, variants for extra versatility the Broil King Imperial 490 - Built In is delivered complete with a separate independent Built In Side Burner included which can be built in to suit the individual needs of each individual outdoor kitchen design.

The intention of Broil King with the Broil King Imperial 490 - Built In is to create a professional standard grill that is easy enough to use and live with for everyday life, a combination that well thought attention to detail, advanced functionality plus high powered performance achieve admirably.

The Broil King Imperial 490 - Built In features commercial grade cast stainless steel cooking grids. The stainless steel has been cast so that the grids are two sided so can be reversed to optimise grilling flexibility. One side is pointed to create the distinctive seared char marks and the reverse is grooved to collect cooking juices for continuous basting. Simply lift out the as many of the four individual grid sections as needed flip over and replace to re-configure.

The Broil King Imperial 490 - Built In is delivered factory built requiring minimal assembly before use meaning that it can be built to a much higher degree of solidity and structural strength in Broil Kings's own Canadian factory when compared to a typical boxed home assembly barbecue model.

This structural strength combined with fantastic performance, build quality and thorough attention to detail make the choice of the Broil King Imperial 490 - Built In the right decision whether in it's Built In with Cabinet or Built In formats.